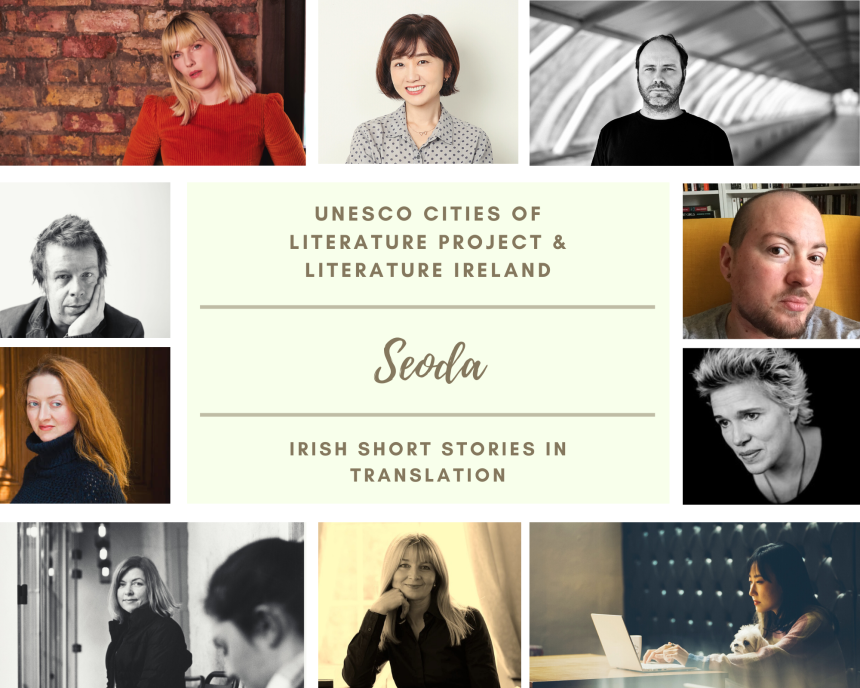 SEODA – Five jewels of Irish literature travel through translation to UNESCO Cities of Literature in Korea, Portugal, Canada and Iceland.

Speaking about the project, the Director of Literature Ireland, Sinéad Mac Aodha said, “These stories by Claire Keegan, Danielle McLaughlin, Mary Costello, Kevin Barry and Wendy Erskine represent some of the finest short story writing in Ireland today. The enthusiastic responses to the stories by the literary translators in the five UNESCO Cities of Literature are testimony to the strength of the contemporary Irish short story. We are confident that readers in those cities will respond in the same way.

We are grateful to Dublin UNESCO City of Literature for helping to mark our anniversary in such a fitting fashion, celebrating the translation and promotional work that we do on behalf of Irish literature across the world.”

Speaking on the launch of the project, Anne-Marie Kelly, newly appointed Director of Dublin UNESCO City of Literature said, “The Dublin UNESCO City of Literature designation acknowledges Dublin’s rich literary heritage and its dynamic contemporary literary output. This collaboration with Dublin-based with our sister cities around the word. It will help showcase just a small sample of the great literature Irish writers have to offer today. The project’s name, Seoda, ‘jewels’ in Irish, perfectly captures the unique and priceless nature of these stories which we are delighted to present to our sister cities.”

The stories, selected by Sinéad Mac Aodha of Literature Ireland, include a story which has yet to be published in English, Cell by Wendy Erskine (forthcoming in Dance Move, Stinging Fly Press, 2022) which is being translated into Icelandic, and Sisters by Claire Keegan, first published in her collection Antarctica in 2016, will be translated into Korean in the city of Bucheon. Kevin Barry’s powerful The Coast of Leitrim is being translated into French for the city of Québec.  Mary Costello’s intriguing Sleeping with a Stranger will be available to read in Portuguese. The quintet of translations is book-ended by another translation into Korean, Daniele McLaughlin’s award-wining Dinosaurs on Other Planets.

The Seoda short stories will be available to read on both the Dublin UNESCO City of Literature and Literature Ireland websites, as well as on the respective Cities of Literature websites in the Spring of 2022.

Claire Keegan is a versatile writer of contemporary fiction. Her first collection of short stories, Antarctica, won the Rooney Prize for Literature in 2000. Her second collection, Walk the Blue Fields, and her short novel Foster were both published to enormous critical acclaim. Claire’s long-awaited latest work is Small Things Like These (2020). She lives in County Wexford, Ireland.

Jiyang Noh studied English Literature at University, and worked as a script writer for radio before becoming an English to Korean translator. Since 2005, she has translated more than 100 books of various genres, including fiction, essay, and children’s books. With her passion for writing, she has also published two essays. Jiyang Noh has translated many acclaimed works into Korean, including books by Roxane Gay and Nicola Yoon.

Mary Costello, Sleeping with a Stranger (translated into Portuguese by Vasco Gato, Óbidos)

Mary Costello is from Galway, Ireland. Her short story collection, The China Factory (2012), was nominated for the Guardian First Book Award and shortlisted for an Irish Book Award. Her first novel, Academy Street (2014), won the Irish Book Awards Novel of the Year Award and was named overall Irish Book of the Year in 2014. Her second novel, The River Capture, was published in October 2019.

Vasco Gato was born in Lisbon, Portugal, where he currently lives and works as a translator. Since 2000, Vasco has published fifteen books of poetry, a play and two anthologies of poems he selected and translated into Portuguese. He has also translated several novels from English, Spanish and Italian, by authors such as Anthony Burguess, Charles Bukowski, F. Scott Fitzgerald, Iris Murdoch, Juan Gabriel Vásquez, Manuel Vilas, Mario Vargas Llosa, Domenico Starnone, Italo Svevo and Roberto Saviano.

Kevin Barry, The Coast of Leitrim (translated into French by Pascal Raud, Quebec)

Kevin Barry lives in Sligo, Ireland. He is the author of three novels and three collections of short stories. His latest novel, Night Boat to Tangier, was longlisted for the Booker Prize in 2019 and named one of the 10 best books of the year by The New York Times. His awards include the Goldsmiths Prize and the Dublin International Literary Award. He also works as a playwright and screenwriter. He is co-editor of the annual arts and culture publication Winter Papers.

Born in France, Pascal Raud moved to Quebec in 2001. He is one of the editors of the Quebec magazine Solaris, the oldest francophone science fiction magazine still in operation. As a writer, he focuses on fantasy and science fiction. Since 2008, he has published around fifteen short stories, and his short story La Mémoire du papillon won the 2021 Aurora-Boréal Award. As a translator, he has published nine novels and numerous short stories. As a queer and immigrant man, he is particularly interested in literature written by those labelled as minorities.

Wendy Erskine lives in Belfast, Northern Ireland. Her work has been published in The Stinging Fly, and she also features in Being Various: New Irish Short Stories (Faber and Faber), and Winter Papers. Her debut collection of short stories, Sweet Home, was Book of the Year in the Guardian, The White Review, Observer, and New Statesman. Her second collection of stories, Dance Move, will be released in February 2022.

Ingunn Snædal studied Irish at NUIG in Ireland and Icelandic studies in Iceland. She has lived all over the world, and has worked in jobs from a cook on a road-construction team to a seasonal worker in herring fishing. Ingunn has published six poetry books. The first, Guðlausir menn – hugleiðingar um jökulvatn og ást (Godless People – Thoughts on Glacial Water and Love) won Reykjavík City’s poetry award in 2006. Her third book, Komin til að vera, nóttin (Here to Stay, the Night) received the Icelandic Women´s Literary Prize in 2010. Ingunn’s poems have been widely published and translated into English, Swedish, Turkish and German. Ingunn has translated around 100 books and plays from English, Swedish, Danish and Norwegian.

Danielle McLaughlin, Dinosaurs on Other Planets (translated into Korean by Jeehyun Shin, Wonju)

Danielle McLaughlin’s debut novel, The Art of Falling, was published in January 2021. Her first collection of short stories, Dinosaurs On Other Planets, was published in 2015 to great critical acclaim, with the title story also appearing in The New Yorker. In 2019, she won the Audible Short Story Award and the Windham-Campbell Prize for fiction. Danielle lives in Cork, Ireland.

Jeehyun Shin is a freelance magazine editor, an English-Korean translator and a lecturer of undergraduate and graduate courses at Hankuk University of Foreign Studies (HUFS). She has a BA in English Literature at Yonsei University and an MA in Consecutive Interpretation and Translation at the Graduate School of Interpretation and Translation of HUFS. She has translated eight books in different genres including both fiction and non-fiction. She lives in Seoul, South Korea with Soy the 10-year-old Maltese.

This project is in partnership with Dublin UNESCO City of Literature.