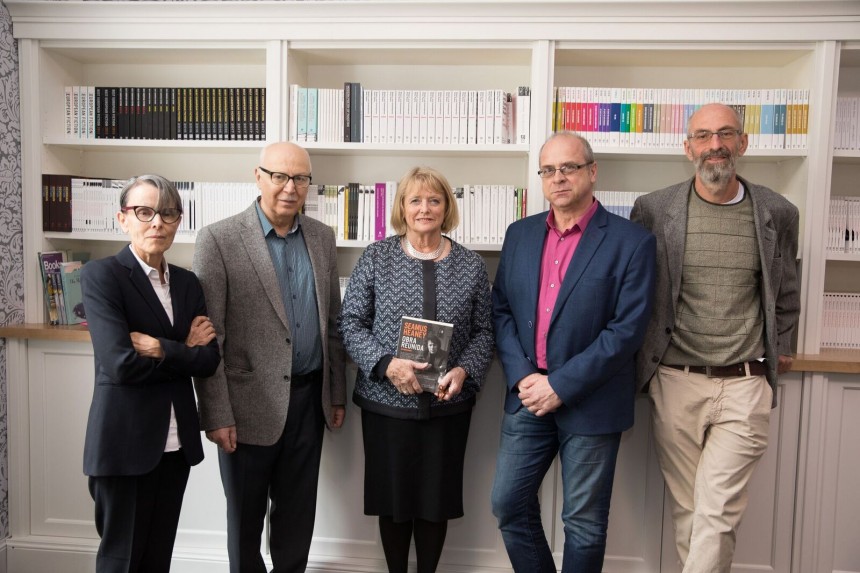 The Trinity Centre for Literary and Cultural Translation, in which Literature Ireland is a strategic partner, was officially opened on Tuesday, 24 April 2018.

At a formal event in the Centre's headquarters at 36 Fenian Street, speeches were made by Provost of Trinity College Dublin Patrick Prendergast, Marie Heaney, John Banville, Katrin Meyfarth of Dalkey Archive Press, and Literature Ireland's Director, Sinéad Mac Aodha. All spoke of the importance of literary translation - of the need to connect the Anglophone countries with the rest of the world, to open minds and broaden perspectives to the multitude of global realities and experiences, and to, as novelist John Banville put it, "bring us unto the world, and bring the world unto us."

Marie Heaney noted that Seamus Heaney had participated in an event in 2012 to mark the beginning of the work to make the Centre a reality, and commended the Centre and its partners on the work that had been done to achieve the renovation of the beautifully restored Georgian building in which the Centre is now housed.

Out-going director Sarah Smyth was especially mentioned by all speakers and thanked for conceiving of the idea for the Centre, for her tireless work in instigating the partnerships with Literature Ireland and Dalkey Archive Press, for fundraising for the renovation of the building, and most of all for her dedication and passion. In-coming director Michael Cronin was welcomed to the post at this exciting time in the Centre's development.