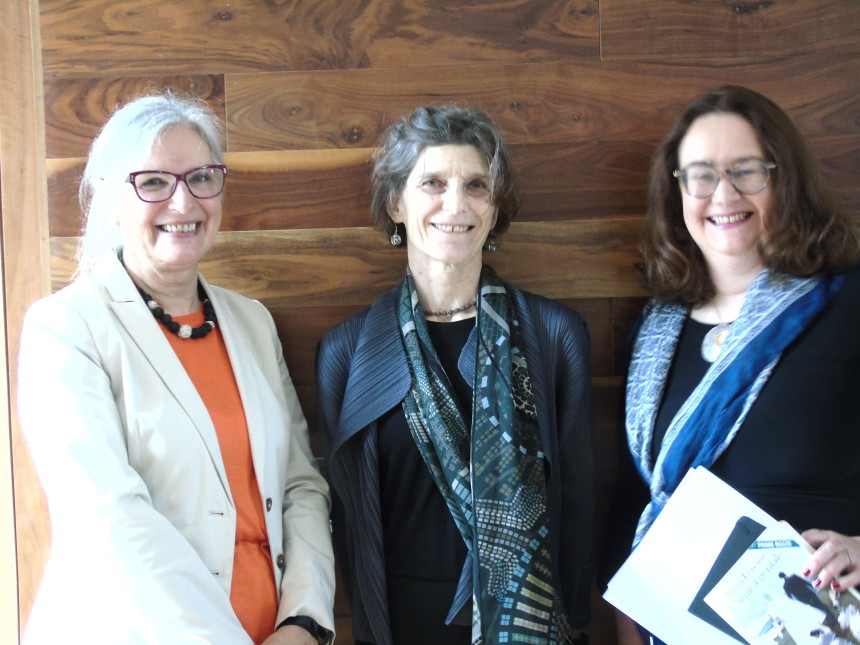 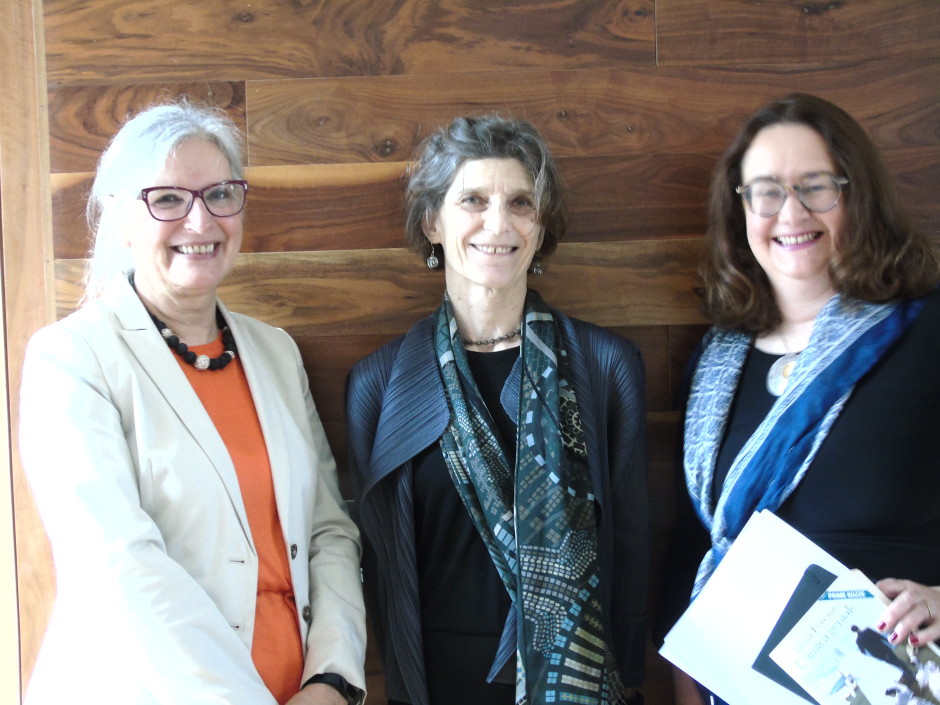 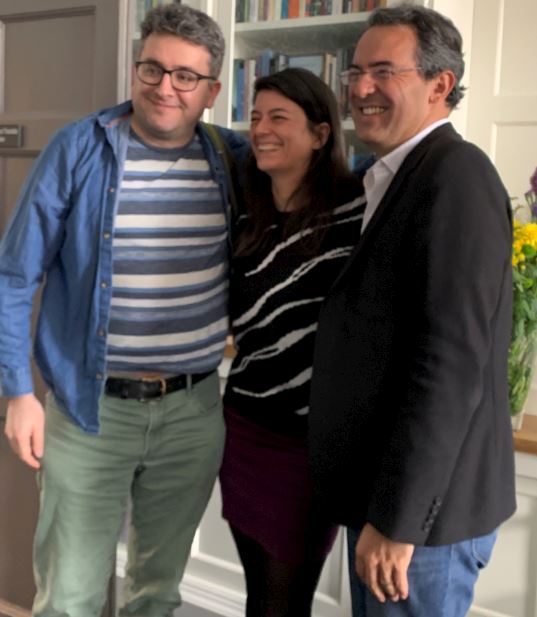 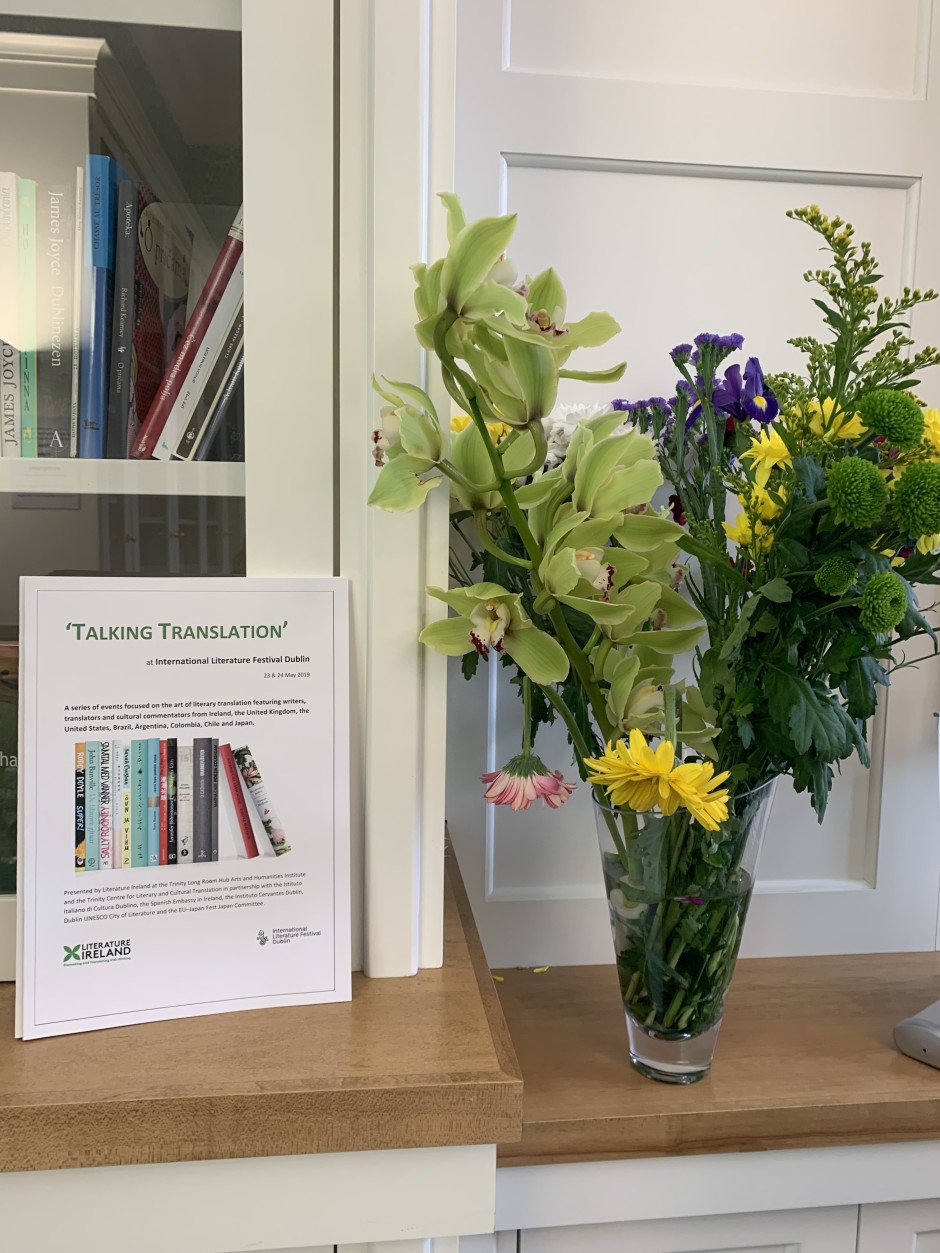 On 23 and 24 May, Literature Ireland hosted its annual series of Talking Translation events as part of the International Literature Festival in Dublin. Authors and translators from around the world came to take part in the lectures and conversations.

On Thursday, 23 May, to start off the two days of Talking Translation, we had the honour of welcoming translator Ann Goldstein, who had come from the United States, to converse with our director Sinéad mac Aodha in the Trinity Long Room Hub about translation and the advantages and problems that accompany translating works from other languages. Having recently translated the Neapolitan novels of Elena Ferrante from Italian into English (My Brilliant Friend, The Story of a New Name, Those Who Leave and Those Who Stay, and The Story of the Lost Child), Goldstein spoke before an excited crowd of fellow translators and readers alike, many of whom had read her translated versions of Ferrante’s work. Ann and Sinéad spoke in depth about the many situations she and translators in general may face when translating a work and how they make decisions when stuck between a word or phrase in the original language.

Also held in the Trinity Long Room Hub, Peter Sirr and Ireland Chair of Poetry Eiléan Ní Chuilleanáin held an in depth conversation regarding the importance of poetry in translation in the past and today. Peter invited Eiléan to consider why poets choose to translate one another’s works, and she offered her personal reasons for translating works only from languages she knows. The audience was treated to a reading of a poem in English by Peter Sirr, followed by the same poem in Irish by Eiléan to emphasise the possible variances between the original poem and the translated. They also discussed whether the creative work of a poet is then influenced by the act of translation itself. Their extensive and thought-provoking questions, followed by in depth answers, made for a wonderful conversation to watch and listen to for attendees.

Following the poetry in translation event, in the Trinity Centre for Literary and Cultural Translation, we had the great pleasure of having translator Daniel Hahn visit and speak with Sinéad Mac Aodha about his translation of Julian Fûks’ novel Resistance. Translating this Portuguese work into English was no easy feat, and with Sinéad, Daniel explored the problems he encountered and the solutions he found when translating it. He addressed the notion of fact and fiction meeting and how he, as a translator, must consider the author and reader, as well as bridge the cultural divide between the author and the reader. The audience had the chance to hear first-hand how a translator considers and addresses these problems and ideas while translating a work from another language.

Friday, 24 May, was also filled with wonderful events led by translators, authors, and members of Literature Ireland. In the early afternoon, we got an in-depth and exclusive talk with authors Juan Gabriel Vásquez from Colombia and Samanta Schweblin from Argentina with Daniel Hahn as the moderator. This seminar explored the cultural encounter between Europe and Latin America and how authors and translators face the challenge of relaying the political realities of a country to readers who have no direct experience of them. The panellists discussed at length the role of translation in communicating the different realities to readers and each gave explanations of their own experiences writing their works and of their thought processes when writing.

The next event of Friday’s Talking Translation series saw distinguished writers Ariana Harwicz from Argentina and Alejandro Zambra from Chile speak with Jean-Philippe Imbert about their experiences with writing and seeing their own works in translations in other languages. With energising questions and conversations, Zambra and Harwicz had different opinions as to how they view their works in translation and what they have experienced regarding the world’s view of their countries’ cultures. This event saw the writers address questions of globalisation’s negative and positive effects and how literature could be a possible solution to bring fresh perspectives to the world.

The last event of the Talking Translation programme ended with an exploration of the cultures of East and West and how literature is exchanged between countries. We had the privilege of hosting Japanese author Tomoka Shibasaki and translators Polly Barton and Hiroko Mikami in conversation as they explored the barriers and opportunities for cultural exchange between literature in English and Japanese literature. As Japanese literature and culture is gaining popularity internationally, moderator James Hadley delved into some of the advantages and disadvantages of translating to and from Japanese. The audience learned of the starkly different cultural references that translators face when translating a Japanese text into English and vice versa.

Many thanks to our partners in the International Literature Festival Dublin, the Trinity Long Room Hub, the Trinity Centre for Literary and Cultural Translation, Dublin UNESCO City of Literature, the Istituto Italiano di Cultura Dublino, Instituto Cervantes Dublin and EU-Japan Fest, as well as our funders Culture Ireland and the Arts Council.