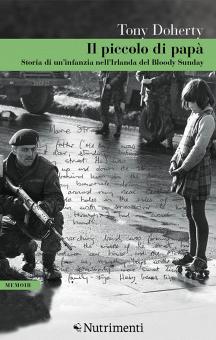 This Man's Wee Boy. A Childhood Memoir of Peace and Trouble in Derry

A uniquely-crafted memoir of the author's early childhood (1967-1972), the third oldest in a working-class Catholic family from the Brandywell in Derry. Written with the authentic voice of a child, this snapshot of his young life unfolds in a series of stories evoking the innocence of childhood, family dynamics and tensions, street friendships and characters, the onset of civil strife, and a family protecting itself from conflict, with CS gas coming in through the door and tracer bullets flying past the windows. The book centres on Tony's father, Patrick - a legend in his son's eyes and a man who struggles to raise a family through bitter years of economic inactivity. It beautifully and movingly portrays the relationship between Tony and the father he adores, yet slightly fears, as events, both within the family and on the streets, unfold and fuse together. The burgeoning chaos of conflict finds its way into his life through the death of a friend under an army truck and more horrifically, directly into the Doherty household. Described as 'a treasure', it draws the reader into a child's world, his innocent view of the harsh reality of life and the horrifying events unfolding around him. It has bags of humour and paints a picture of a lost world of children running wild in play, unsupervised by or worried over by adults. The book is also very moving, to the point of provoking tears at the end.