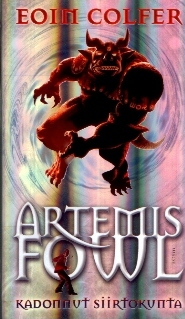 Artemis Fowl and the Lost Colony

Ten millennia ago, the fairy people were defeated in a great battle with mankind, forcing them to move underground. Only the 8th family of fairies remained undefeated: the demons. But now one demon has discovered the secrets of the fairy world, and if humans get hold of this information, the fairies are in big trouble. Only one person can prevent this disaster: teenage criminal mastermind Artemis Fowl.